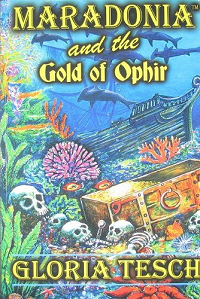 Note: After self-publishing this novel, the Tesches went back and cut the book in half, re-releasing it as two separate books titled

(which you can buy on Amazon). I own the original edition, so this sporking covers the first two books of the re-released editions.

I like Maradonia™ and the Gold of Ophir’s cover. Instead of getting half a blonde chick who’s very fond of highlights and a half a demented Medusa, we get a pleasant undersea scene with a bunch of poorly drawn hammerhead sharks, half a ribcage, a femur, and five skulls. It’s exactly the kind of appealing image that would draw in those 10-year-old girls we kept seeing in the Maradonia book trailer.

And considering the title is Gold of Ophir and we’re looking at a chest full of gold, I actually have some hope that the cover image is a scene from the book, unlike the first book, where the cover image had jack all to do with the book.

Inside, we still have the enormous font size from the first book, and a new error: the text isn’t centered between the top and the bottom of the page, it’s too high on every page, which makes it look rather ridiculous.

However, from scanning through the text, there are several improvements. Team Tesch has finally figured out that punctuation goes inside the quotation marks, so instead of “What are you talking about”? said Joey, it’s “What are you talking about?” said Joey. Although random italics are everywhere, I don’t see nearly as many ‘unnecessary’ ‘quotation’ marks around random ‘words’. Even the back cover has a nice quote:

So yeah, there are still some problems.

Take a drink every time…

If you can survive to the end of the book without acute liver failure [you won’t].

The Sequel: Maradonia™ and the Law of Blood

One Response to “Maradonia™ and the Gold of Ophir”