Tesch posted this video September 11th, with this lovely comment below it:

Every writer has had writer’s block! Known as a blockage of the mind’s imagination flow.

That’s not actually the definition of writer’s block, but okay. Let’s dive into this.

We open with Gloria sitting on the edge of a dock looking very pretty and vivacious and showing off a truly impressive amount of skin, which I guess is okay because she’s 18 now. She pauses for about two seconds, or just long enough to make it rather uncomfortable, before she gets going and introduces herself. I have to admit that I spent the entire video hoping she would lose her balance and fall into the drink, but that is mostly because I am a bad person. Although the more I watch this video the more I feel like she’s not actually on the dock. I’m not sure why, and it’s probably just a weird lens, but the way it’s shot makes me feel like she’s in front of a green screen with the water added later. 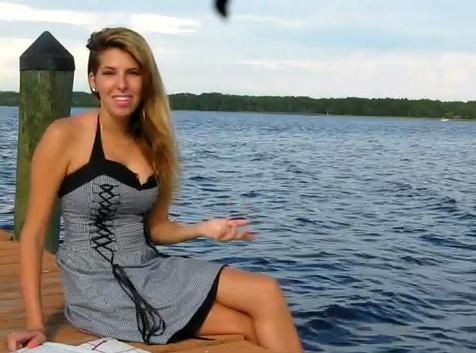 We also have a black mark hanging down in front of the camera lens, which looks kind of like the photographer’s thumb but is probably just the mic. Either way, it’s definitely annoying and unprofessional.

Incidentally, there’s a really good reason why shooting in front of bodies of water is a terrible, terrible idea, and that reason is sound. It’s a little better here than in past videos, but over the water rippling and the wind, Gloria is practically unintelligible.

Gloria explains who she is and that she authored the Maradonia Saga, and gets down to business:

Yes. Please tell us how. In fact, you don’t need to introduce the fact that you’re going to explain this, you can just start explaining.

Whoa. Hold on. Curing writer’s block is EASY? What have I been doing with my life?

Gloria explains that they’re actually in a peaceful place.

I’m not sure if she meant that she likes to write HERE, as on, on the dock, which is kind of an interesting choice. There’s something to be said for writing in idyllic locations, but I probably wouldn’t lug my laptop down to a dock, and writing on paper would be horrible because of the constant wind.

Alternately, maybe she just wanted to explain why she’s sitting on a dock.

Gloria explains to us that when she younger, her teacher assigned her a free-write essay, because she was in a writer’s class. Well, that does make sense.

So, I started writing this story, and over time, I came up with this awesome story.

And then you published it and it’s called Maradonia and the Seven Bridges?

And then one day, I had no idea what to write about. 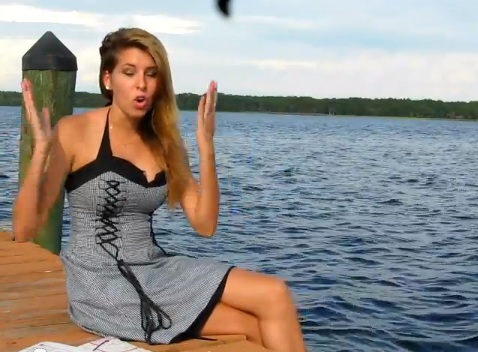 This is writer’s block, you see the blank screen, and you’re just like, URK, what do I do next?

Gloria whips out what she calls her “concept board” and that she discovered it while drawing her story outline. 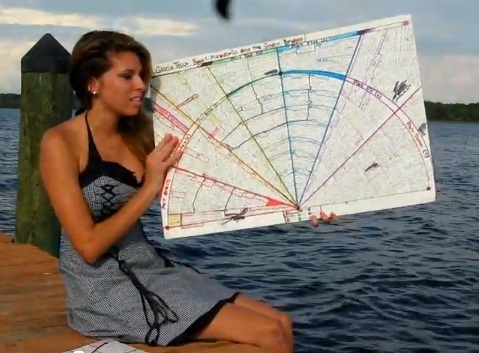 This actually looks really interesting, and it would be even more interesting if I could see exactly what she’s doing. Holding a posterboard with tiny writing six feet away from the camera is not really conducive to learning.

She does! She explains that you draw a semi-circle and then move from the beginning to the middle to the end. Then in between you write out your storyline of what exactly you want to happen. Okay. So basically, a timeline. Or a plot. Or a basic outline, except it’s on a posterboard in a half-circle format.

Tesch explains that actually she had large chunks of the story unplotted, which doesn’t surprise me, and she filled in those chunks later, which also doesn’t surprise me at all. I’m not saying that’s necessarily a bad way to do an outline or to write your book, in fact that’s pretty close to my preferred outline method…but you have to be careful of not just thinking, what comes between Plot Point A and Plot Point C? and then coming up with a random side quest that’s unrelated to the actual story just to fill up space. If nothing happens, then don’t put in anything.

So, with this outline, Tesch then sat down with her family and asked them what she should do, and they promptly started sharing ideas for different things that could happen. And…

…it actually came out very nice.

Tesch pauses for a moment, looking as giddy as a schoolgirl and then sets it down, explaining that

Which it might be, but I can’t actually see what’s on it so I don’t know.

Tesch whips out another board with lots of stuff on it that is also pretty unreadable. 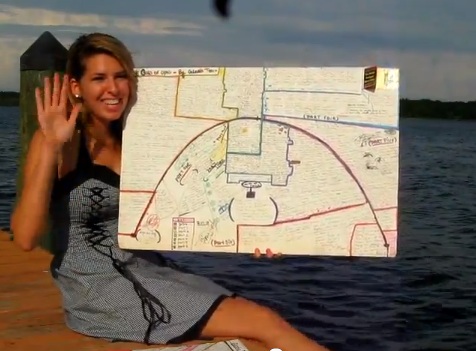 She explains that you just “write it all out”. Okay then. Gloria continues that young writers like to stick to chapter one and then write it and edit and edit and eventually you just give up. She has a very clear idea of whether you should follow this path: 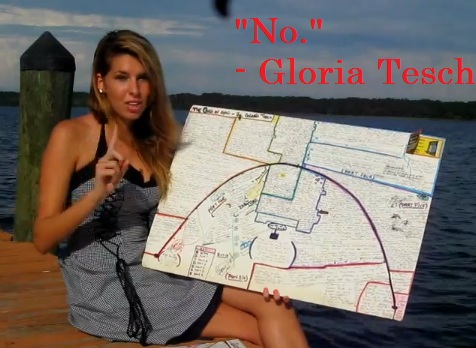 What you need to do, is write your entire concept out, and work on it from the beginning to the middle to the end.

This is actually really good advice, and one of the reasons I like things like NaNoWriMo – you should sit down and just start writing and keep at it until you pound out a first draft. Once you have it down on paper, then you have time enough to start the editing process.

Gloria explains that you should find a nice peaceful setting, like the one she’s currently in, and maybe even some nice peaceful music to let your imagination flow. She then gives some positive encouragement, which would be nice if she didn’t sound like she was talking down to a group of preschoolers:

You will find your story soon! It’s meant to be, let your story flow, and don’t just keep developing it and keep re-editing it, that’s the editor’s job!

Which I guess explains the quality of the Maradonia Saga.

You are the author! You must write it all out, and write the entire story, everything you are thinking about, and then it will just come soon, and hopefully soon you will be published!

Alternately, if you want to do a good job, you may spend years editing, revising, reediting, and then years querying literary agents, and then further years trying to get your book published.
Or if your parents are rich they can self-publish it and you can throw your literary toilet training, to borrow a phrase from swankivy, out for the world to see.

She closes with this gem:

Thank you for listening to my video.

Gloria plugs Maradonia, bids us all an affectionate farewell, and flashes another winning smile.

So there you have it folks. How to overcome writer’s block: simply write an outline on some posterboard and then solicit plot ideas from your family. It’s not the worst advice I’ve ever heard, but it’s not that great, either. What if you write an outline and you still get writer’s block? Or what if you’re like me and you only get writer’s block when you’re writing from outlines because you enjoy making things up as you go along and find the act of writing to be an intensely creative process as you discover the story along the way and that creative energy feeds your brain and keeps you going?

Then again, I think the answer is clear: if you’re ever stuck and you don’t know what to do next, just plagiarize a scene from the Bible! It’s in the public domain so you can’t get sued.

Bonus: if you want a chance to win a free Maradonia book or you want to see Gloria Tesch walk the Republican National Convention Runway, there you go.