They chill out in Cloud City. Vilmos swims in a bathing pool.

Hidden things stirred within the boy; and they awaited the time of their further arousal (page 82).

We learn that Xith and Ayrian are debating with Noman and Vilmos has been left to his own devices, mostly involving tooling around and watching Amir fight his shadow. It’s odd, since in the last chapter Vilmos sudden Knew A Lot about what was going on, and now he’s back to being a mindless idiot.

A couple weeks pass, and Stanek tells us that “a decision had been made the previous day to leave the city of the sky”. Of course. Most decisions take place off-screen here. And after spending so many pages on the journey here, now they’re leaving after a page and a half and nothing has fucking happened.

They’re eating their last meal and talking in Stanekian and suddenly all the walls and ceiling are smashed to bits and Amir shouts that “they” are coming. Noman conjures up a magical spell that protects them from the falling debris. They all look at a glowing figure standing there.

“Here me, O Dark Ones! You shall return to your masters either in defeat or victory this day, but let it be known that I, Dalphan, the Wanderer-Reborn, He that in his madness was once Rapir the Black, dissolve the dark pact with his brothers” (page 85).

First, it does say “Here me” instead of “Hear me”. Dead serious.

Third, I have no idea what this is supposed to mean.

There’s a chap named Mrak who is a wraith king – wait, where have I heard of that before?

With the corporeal form the soul was offered a place of refuge from torment and within this form there remained bits and pieces of what had once been individual discernment, and this caused them to both fear and greet the return to darkness with an unsettling expectancy that chilled Amir (page 87).

This is how Stanek writes action sequences.

The fight scene goes on for a while. Then it increases in intensity:

Robert Stanek is a fucking poet. I can’t believe these books couldn’t find a real publisher.

There’s a very long and very incoherent fight scene. Sathar (the Dark Lord) shows up and fights his brother Dalphan for a bit and then most of the bad guys disappear.

We rejoin Prince Valam, watching the training grounds where his men practice fighting. We learn they’ll be ready to go in about a week. Valam decides he will join the fray:

“It is time I showed Brother Seth how to really handle a weapon.” (page 98)

Which he didn’t do before they fought side by side in the fight-to-the-death tournament they just, you know, won? Which was also where Seth proved that he’s more than capable fighting with a weapon?

Keeper Martin rolls in and wants to talk to Chancellor Van’te and Father Jacob in private, so I guess Martin has journeyed from Great Kingdom to Quashan’ since the last chapter. It’d be a lot easier to understand the timespan if Stanek would insert details to make that clear, such as “The company spent the next two weeks gathering supplies and training for the next march”. See how simple that is?

They talk in Stanekian. It’s incomprehensible as always. Here’s basically what is said:

“Many things are changing. They mentioned great shifts in power.” (page 100)

“Two nights ago I felt the Father cry out. I have never felt such great emotions.” (page 100)

So yeah. I have no idea. “Kir” has never been mentioned before and it’s not in the glossary at the end. Van’te freaks out when Jacob mentions it because it’s a “forbidden” word, but that impact is lost on us because we have no idea what the fucking context is because Robert Stanek has literally no idea how to string together words to communicate ideas or concepts or stories.

Martin goes on to say that he and Jacob feel it’s best if Prince Valam doesn’t leave the kingdom for the journey to the Reaches. They don’t explain why they feel this way (naturally) and Van’te doesn’t ask (naturally) because these aren’t characters, they’re two-dimensional cardboard cutouts that recite lines like they’re in a bad soap opera, except even bad soap operas have better writing that this. IT’S NOT THAT FUCKING HARD, STANEK. GIVE YOUR CHARACTERS MOTIVATIONS FOR WHY THEY DO THE SHIT THEY DO. Hell, I’ll even take a terrible, illogically, out-of-left-field reason:

“We think Valam should stay behind.”

That’s not great, but at least it’s something.

Van’te agrees to meet with Valam to break the news – whatever the hell the news supposedly is – and does so, and Valam agrees to accelerate the departure date. However, Van’te can’t bring himself to break the other news, because…he’s worthless at his job?

Nothing happens for a few pages and then the chapter ends.

Holy shit, we’re back with our least favorite bitchy princess, who’s been conspicuously absent for the first 100 pages of this book.

As you hopefully don’t recall, when we last met Adrina she’d punched the Dragon King and then teleported back home to discover her friend Myrial had killed her rapist and was now the head of the Imtal spy network.

Adrina walked through the garden lost in thought, as she did often now. Many thoughts crossed her mind, each seeming to blow in and out with a fresh breeze (page 106).

That’s all the detail we’ll get. Most authors would actually include what their character was thinking about, but that’s why Robert Stanek is an acclaimed bestselling author.

Pain hit her suddenly and she doubled over. She began to cry out and she coughed up blood once more. The tiny dragon she had named Tnavres dropped from her shoulder and licked the blood hungrily (page 106).

She has a pet fucking dragon now?

So in Adrina’s second-to-last sequence last book, she slugged the Dragon King and pulled out a tiny dragon that sat in her hand. We then flashed forward to Adrina getting home and ignoring her father and talking to Myrial will absolutely no mention of this dragon, so naturally I assumed it was a random plot point that was mentioned and then utterly abandoned, the way Stanek usually does…but this one was kept, and Adrina just didn’t think about the fact that she’d recently adopted a tiny dragon and smuggled it back into the castle, you know, the way people tend to not think about huge life-changing events in that way.

So she has a pet dragon with a taste for human blood. A tiny pet dragon that sits on the shoulder of our spunky princess. Where have I seen that before….? 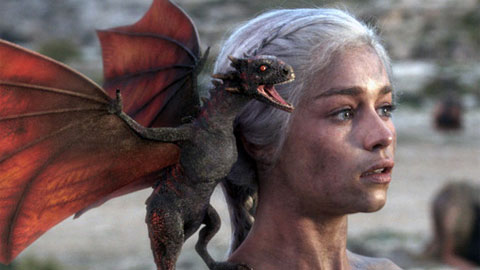 She has a vision of the Dragon king talking to here about quite literally nothing.

“But I have listened and done all you asked. I gave you it all. What more do you want? What more?”

This is why you have an editor, kids. So they can write “What the fuck are you talking about?” in the margins of your manuscript.

I mean, I’m guessing all this makes sense in Robert Stanek’s mind. With Herculean effort, I’m occasionally able to parse through the layers of nonsense and obfuscation to get an idea of what sort of plot he’s hinting out, but I assume he’s just such an utterly inept writer that he has no idea how to create a story that any reader can enjoy – and, being a self-published author, he doesn’t have an editor to point out the majority of the book makes no fucking sense when read by anyone.

Even so. These are the basic building blocks of writing that most people can understand just from having read other books. Even Gloria Tesch was capable of making more sense when she was self-publishing at the age of 13. What excuse does Robert Stanek have?

With his head, he lifted up her shirt and then he faded into her, leaving only his mark upon her skin (page 108).

Huh. So this dragon is living inside her body.

She goes back to sleep and has some random hallucinations until Myrial wakes her up and says it’s her father. Adrina grabs a robe and they head down to King Andrew’s room where he’s surrounded by chanting priests. He spits up some blood, tells Adrina that he’s going to be fine, and dies.

Well. That was….unexpected. I guess not too unexpected, since from what we’ve seen King Andrew has been a horrendously incompetent king and richly deserved whatever death was coming for him. But it was unexpected in a coming-out-of-left-field-without-rhyme-or-reason sort of way, which makes it fit in perfectly with the rest of this series.

7 Responses to “Part 3: Their Further Arousal”