Fields of Honor » Part 2: Not Much Happens

I just realized that this book, unlike the previous two (or four, depending on which version you’re reading) doesn’t have chapter titles. Normally, I’d call that weirdly inconsistent, but really, that just adds to the charm.

The team heads back to Imtal while Valam has a series of increasingly dumb thoughts.

Valam for his part hoped they would see some action. Many of the men they traveled with were untested, green if truth be told, and a clean, decisive victory on the open road would go a long way toward easing the men’s worries about what was ahead (page 46).

Yes. He’s hoping that they get attacked by a roving pack of bandits. Which will almost certainly lead to the death of some of his men. Because they could use the experience. Genius.

He also thinks about Galan sacrificing herself for Seth, and whether he’d do the same for Adrina.

Somehow he didn’t think he would have – not that he was afraid to die, death he wasn’t afraid of – more than he wasn’t sure the trade off Galan had made was a wise one (page 47).

It’s good to know that Valam wouldn’t sacrifice himself for Adrina. Sure, it seems like a bit of a dick move, but honestly, Valam’s shown himself to be moderately competent, and Adrina has repeatedly demonstrated she’s a fucking idiot, so that makes sense. I have no idea why he wonders this about Galan and Seth, since he didn’t know Galan, at all, and the very, very little he knows of Seth is that Seth is a very competent fighter and also the Leader of his Mission.

Anyway, this random thing is bothering him to the point that it’s come between his friendship with Seth, for no reason whatsoever. He randomly thinks about his “betrayal” and I’m not sure whether we’re supposed to infer that he’s planning on betraying Seth in some way. There’s also mention that he’s marching with a force of ten thousand men – a fact you’d think would be mentioned toward the beginning of the chapter. You know, to place the scene and let us understand the context in which his actions are happening, rather than a throwaway line buried in a dense paragraph three pages in.

See, if you set up the context in that way, Valam’s previous pondering about almost hoping for an attack makes sense, since his force of 10,000 men would royally fuck up anyone who would attack them. Then again, no ragtag group of bandits would be stupid enough to attack an army that size; the point being, Robert Stanek is an incredibly bad writer.

So there’s a hunt and Valam has a vision of stag which is probably supposed to Represent Something. One of the hunters captures some scraggly half-man (dwarf? Hobbit? It’s not explained because Stanek) tooling around the forest. Valam calls for his sword, because the guy is probably a bandit or poacher, but then sends most of the men away and cuts him free. Apparently it’s a guy Valam knows, named Eldrick.

They follow Eldrick through the forest to a large tree. We learn that Eldrick is actually a tree-spirit of old whom Valam met when he was quite young. Eldrick changes form into a handsome young man and pokes fun at Valam. Seth has a minor freak-out because Eldrick is his “forest brother” and the Elves thought they were all lost. Eldrick then bursts into song. It’s, uh….it’s not Tolkien:

Oh Pine of winter forest, they were tall and green and right

In the dark hour of the cold, long night they were a delight

Eldrick climbs inside his tree, which starts glowing. Valam demands to know what the tree-spirit wants. Eldrick explains that Valam wanted to test Seth, because Eldrick couldn’t appear to anyone untrue of heart or mind of spirit.  And now the test is over, but in return…he’s going to go with them. Valam doesn’t argue, and they all head back to camp.

Awesome. Another character I don’t care about to keep track of.

Amir and Noman talk in Stanekian for a couple pages. Let’s skip past it.

Vilmos and Xith and Ayrian eat breakfast and get ready to leave.

“Where are we going?” Vilmos asked.

FOR FUCK’S SAKE STANEK CAN YOU HAVE SOMEONE JUST ANSWER THE GODDAMN FUCKING QUESTION FOR ONCE?

Not that it matters too much, since just last chapter Vilmos points out they’re going to the cloud city, so…Vilmos has short-term memory loss? Even so.

He rolls into a place and meets up with….Keeper Martin, the friendly lore keeper who resembles Robert Stanek and may or may not be up to something.

Martin, using hand motions, conveys that it’s not safe to talk aloud. So they chat about bullshit while he looks at a book and then slips Martin a parchment and rolls out. Down the hallway, Martin pulls him into a hidden doorway and demands to know what the fuck is going on. So Noman explains – nothing, of course.

He tells Martin to go to Quashan’, taps his staff on the ground, and vanishes.

They walk for several pages. Vilmos overhears Xith and Ayrian talking about the Hunter Clan. They keep walking until they arrive at Solstice Mountain. Was that so fucking hard, Stanek? Here, let me demonstrate how easy it might be:

Vilmos: “Where are we going?” 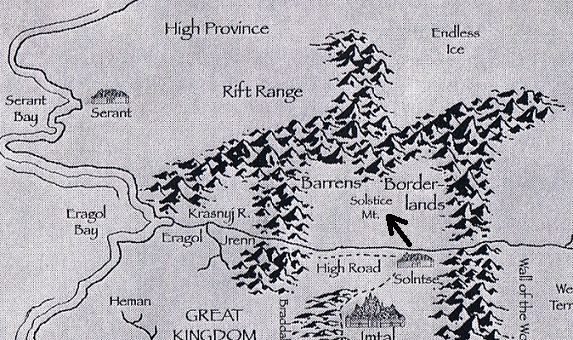 Okay. So they’re heading into the Icy North toward a big mountain range. Got it.

They walk for a few more pages and they’re spotted by two others, one of whom is Amir. He teleports down to where the trio is and draws his sword, but Vilmos speaks the password – because he knows the password – and they all teleport into an audience chamber of the Cloud City. Noman introduces himself and Amir.

“Your arrival here marks the beginning –”

“- of the end,” interrupted Vilmos. “Very dark times are ahead; the world will fall to utter chaos. There can be no stopping it, for even if you tried you could not, for it must be. Soon the world will be divided as chaos begins. […] All civilization will be laid to ruin.” (page 75)

Vilmos certainly seems to know a lot all of a sudden. One wonders why he was asking dumb-ass questions like “where are we going?” when he seems to know all this stuff that we the readers certainly don’t know, despite being able to theoretically peer into the minds of pretty much everyone.

One also wonders why Vilmos doesn’t spend much time pondering all this upcoming death and destruction or why Stanek doesn’t bother giving us some interesting backstory on how Vilmos knows this, or what he feels about this, or what the backstory on this Cloud City is, instead spending five pages of this fucking chapter detailing every goddamn step of a walk through the foothills and up the side of a fucking mountain.

They roll into Quashan’. Stanek doesn’t tell us it’s Quashan’ for several pages, referring to it as “the city” just to keep his readers confused, but it’s Quashan’. Valam dismisses all his soldiers.

He also promised to ensure that the city’s taverns flowed with ale until the last man passed out (page 76).

Seems irresponsible not to leave at least a token few guards.

A random person approaches and asks Valam if they can have a word. Chancellor Van’te whispers in Valam’s ears that it’s ‘Bowman Ylsa’, because Chancellor Van’te apparently knows all 10,000 of Valam’s soldiers by name, but this enables Valam to greet the person by name.

“I don’t know if you have noticed, my lord, but I am not a man,” the woman spoke kindly, not harshly as she dismounted. Ylsa unbundled her hair and let it flow long. “I prefer the title of Archer if you do not mind.”

Ylsa rolls out and Valam watches her go. Wait, that was it? She asked the prince for a word and said, “I am not a man?” and then left? Unless….this was a creative sexual proposition? Which may actually have worked, judging by the way Valam gawks at her backside.

He would tell Isador of this one; perhaps she could spark an interest as a concubine, forcing him to a wife of standing (page 77).

Uh…so banging one of his Archers will help Valam toward getting married? Okay then.

They head inside the palace and freshen up and Van’te says he has a surprise guest for Seth – and it’s Cagan! You remember Cagan? The thoroughly inconsequential minor character last mentioned around 700 pages ago? He was the captain of the boat that carried Seth and Galan across the sea before they were attacked and went down, but he survived because he met an old blind man who was also a doctor, apparently.  He and Seth catch up, and that’s that.

3 Responses to “Part 2: Not Much Happens”