Fields of Honor » Part 1: Nothing Happens

Trouble starts brewing while the evil King Jarom Tyr’anth (you know he’s Evil because the first six letters of his last name spell TYRANT) of Vostok poisons his rival King Charles of Sever, and convinces Charles’ son Prince William that the creatively titled Great Kingdom (ruled by the Alders) was behind it.

Meanwhile, a team of Elves is dispatched across the sea to convince the world of Men to help them fight against the Dark Lord or something.

Princess Adrina Alder (a bitch) and her sometimes friend, wannabe lover, and everyday punching bag Emel, along with a group of two-dimensional characters head south, randomly meet up with the Elves, wander casually into their enemy’s fortified camp and manage to somehow convince Prince William that they weren’t behind murdering his father using evidence that is never explained. Prince William withdraws from the fight and the Heroes defeats Jarom’s forces. Diagram time: 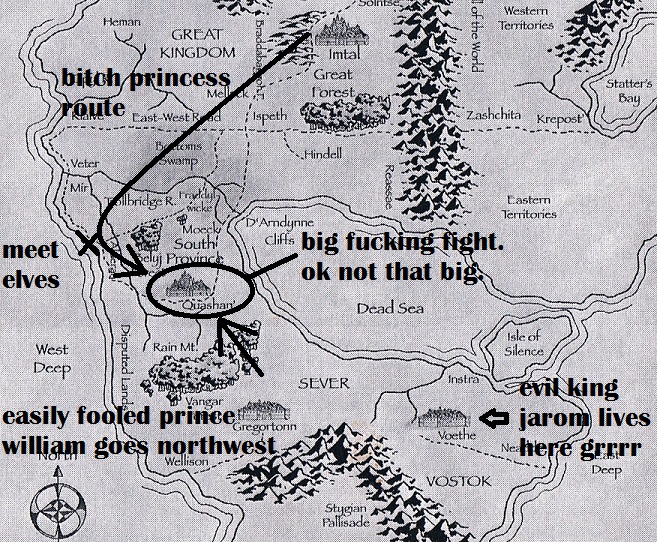 Also, a young lickspittle named Vilmos can do magic and he tools around with a gnome named Xith, popping between universes, getting increasingly more average at magic and dabbling in chess.

Afterward, there’s about three hundred and fifty pages of characters dicking around doing nothing. It could charitably be called pseudo-political intrigue, except it’s not intriguing and doesn’t really involve politics, just characters refusing to get to the point, arguing about inane trivia, and wandering aimlessly around.

Seth tries to convince the men to help them out against the Dark Lord but is mostly unsuccessful so he and a few pals join a tournament to win the respect of people and this succeeds.

Great. New character. Glossary at the back says he’s “One of the lost” and a “Child of the Race Wars”. That’s super helpful. Amir chats with somebody, and it’s classic Stanek dialogue: many words, nothing being said:

“They’ve arrived in the high desert; the field is set. The others will come now. I only pray that all will not be lost.”

“You lose faith,” the other replied without looking up. “You must be patient. In the end, the paths will come together. It is so written.” (page 23)

Amir vanishes out of a place of light and appears back on a place called the Rift next to a chap named Ashwar. They watch a procession go by – giants, beastmen riding mammoths, Dragon Men riding bears and wolves. Apparently there’s something called a Gathering that is happening. Stanek loves his creative names.

We skip POV to Ashwar and learn that Amir is a giant, known as “Titans” – about twelve or fourteen feet tall. And then Amir steps back into the light and…teleports, I guess, away. And skip POV back to Amir. I really dislike this tendency to switch POV characters within a chapter, especially without so much as a chapter break. It’s hard enough to follow this fucking story.

Amir chats with a man called Noman (subtle) about nothing. In fact, let’s invent some new terms: when characters talk to each other in meaningless phrases that are intended to sound deep and mysterious but instead convey actually nothing, let’s call that Stanekizing, or speaking in Stanekian.

Amir flashes back to a battle in Gregortonn where they battle an unspecified enemy until his father gets shot in the face with an arrow, which snaps him back to reality. He Stanekizes with Noman for a bit. Days pass. He practices fighting against a shadow, which is him [?] and wins, as he always does.

Eventually he teleports to the Barrens, and sees some figures around a fire.

Ayrian (the Eagle Lord) and Xith (the gnome shaman) Stanekize around a fire. I’ll give you a taste:

Xith asked, “Will you be able to do what I cannot if it is so?”

“I will do what must needs be done.” Ayrian looked at Vilmos, his face an expressionless mask. “For what other reason would you have wanted me here?”

Xith reached out, gripped Ayrian’s arm above the elbow. “I did not expect otherwise but I needed to hear it, old friend.” (page 34)

No, we will never find out what they are talking about.

Vilmos wakes up and watches Ayrian singing a song to the sun. Eventually Ayrian’s shadow detaches from his body and touches Vilmos’ face and then disappears. Vilmos asks where Xith is, and Ayrian doesn’t answer because nobody answers questions in a Stanek novel.

His eyes went wide. “The door has been opened! Beware that the Darkness return!” (page 36)

He once again spoke with the other’s voice. “Shall we then find my beloved? Is it yet time?”

“The day has not come; she rests and longs for the day you will join her.” (page 36)

There’s thunder and lightning and he gets hungry and nighttime comes and time passes and Ayrian and Xith aren’t there and eventually Vilmos lays down and goes to sleep and Ayrian and Xith walk up. So basically either Vilmos was having a bad acid trip or Something Significant Was Happening but we won’t ever know which.

Then again, every fucking one of Vilmos’ chapters is like a bad acid trip with him hallucinating about magic and popping between worlds and teleporting around and characters randomly showing up and fighting and nothing ever actually happening or progressing or being resolved. Seriously…I just reread the first two sporkings to get them back into my mind and the only thing I can certainly say has happened is that Vilmos has learned how to play chess. That’s also his only character development over the past 700 pages.

“Is it come to pass?” Ayrian asked.

“I have seen the point at which the paths split but only the passing of the hour will decide it, as ever.” (page 37)

Yet another reminder why editors exist. So piece of shit books like this do not.

Anyway, then the “dark kin” attack because that’s also what happens in Vilmos chapters. There’s a five-page, impressively tedious fight scene, which we’ll skip past, and catch up with the results:

Ayrian was near death. Xith was battered and bruised, his long dark cloak tattered and saturated with his own blood (page 42).

Xith uses the last of his strength to try and heal Ayrian and then passes out. When he wakes up, Vilmos is wandering in circles playing with the wind. Apparently there’s been some sort of struggle inside Vilmos and Xith isn’t sure who has won. Hmm. An internal struggle, presumably between the forces of light and dark. That sounds like an interesting piece of character development that might be relevant for one of the story’s main characters. Of course, it also sounds difficult to write, which is probably why it happened off-screen while Vilmos was asleep and instead we got to read about a couple people blasting shadows with firebolts. Nice work, Stanek.

The Wanderer, who had outlived the whole of his brethren and had witnessed the births and deaths of races and nations, had come home at last, if only in the form of the boy before him. Vilmos would be bound forever and inexorably to memories of things as ancient as the wind and to the Wanderer, who was now a part of him (page 45).

Huh. So Vilmos is now merged with the Wanderer, a character or entity who has never been mentioned before. Let’s look it up in the glossary – nope, it doesn’t exist there either.

In fairness, all of this will probably have no relevance to the plot and never be mentioned again.

6 Responses to “Part 1: Nothing Happens”