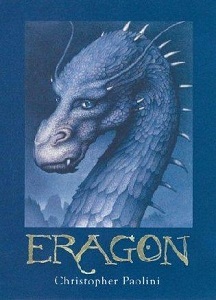 Eragon, a poor farm boy, lives with his  uncle in  Carvahall, on the outskirts of the Empire.

Princess  Arya, who works with the Rebellion, has stolen the  dragon-egg from the Empire. She is captured by  Durza, a mysterious being with strange powers. Just before she is apprehended she sends the  dragon-egg to  Carvahall, where it is discovered by  Eragon.

The Empire quickly arrives and kills  Eragon’s  uncle, but before  Eragon is captured he is whisked away by a strange old hermit named  Brom, who is later revealed to be one of the last surviving members of an ancient order of peacekeepers known as the  Dragon Riders.

As they journey,  Brom gives  Eragon a  sword that once belonged to his father. Turns out  Eragon’s father was also a  Dragon Rider, however he turned evil, betrayed the  Dragon Riders, and helped wipe them out.

Along the way, they pop into the Empire’s base to rescue Princess  Arya, although  Brom dies, sacrificing himself to let everyone else escape.

Eragon also meets up with  Murtagh, an affable rogue with questionable morals who kicks a hundred times as much ass as  Eragon. They then journey to meet up with the Rebellion and fight an epic battle that, with  Eragon’s help, ends in a decisive victory for the Rebels.

For all its many, many flaws, Eragon is written with a certain boyish enthusiasm, and for a boring, generic fantasy title, you could certainly do a lot worse. It’s not a terribly bad novel, and at times the plot is actually quite exciting. If you don’t like to be challenged in what you read and can appreciate a mediocre plot, amateur prose, the Hero’s Journey, and you really like umlauts, Eragon might be for you.

Eragon is generic and derivative. Aside from the plot, which is taken almost scene-by-scene from Star Wars, Eragon borrows heavily from The Dragonriders of Pern, Earthsea, Jeremy Thatcher, Dragon Hatcher, and The Lord of the Rings. There is nothing new to see here. Everything Eragon offers has been done elsewhere and many times better.

One Response to “Eragon”