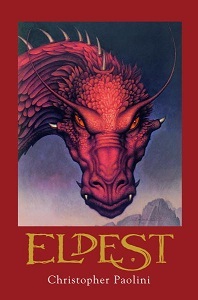 “Let us wash the sweat from our limbs,” said Oromis when they finished.

Going to the stream by the house, they quickly disrobed. Eragon surreptitiously watched the elf, curious as to what he looked like without his clothes. Oromis was very thin, yet his muscles were perfectly defined, etched under his skin with the hard lines of a woodcut. No hair grew upon his chest or legs, not even around his groin. His body seemed almost freakish to Eragon, compared to the men he was used to seeing in Carvahall – although it had a certain refined elegance to it, like that of a wildcat (page 289).

Eragon heads off to   Ellesmera to be tutored by  Oromis in the ancient art of having a hairless groin. Meanwhile, Eragon’s half-brother Roran goes vigilante and leads an entire village in open revolt against the Empire. Roran is also transformed overnight from an uneducated peasant to being the greatest fighter in all of Umlautgaesia, despite having no formal training at all.

The C plot revolves around Nasuada, who is given control of the Rebellion just because her father was the leader before her, despite having no qualifications and the Rebellion being an loosely organized group of terrorists freedom fighters. Her only effect on the plot is when she effectively destroys the lace business, putting dozens of lace-makers out of business by flooding the market with cheap, affordable lace.

Eldest is the literary equivalent of a root canal: long, painful, and very unpleasant. When I finished Eragon for the first time, despite my many misgivings I was actually rather looking forward to reading Eldest – I was fond of several characters and excited to see what happened next. Eldest, unfortunately, instead of being a step up, is a careful and thoughtful step backward. It takes everything wrong with Eragon and accentuates it, turning Eldest into 668 pages of uneventful purple prose. There’s an entire chapter about ants. Aside from the unintentional homoeroticism, the only other scene worth noting is when a pair of naked tattooed Elven lesbian tarts dance around and conjure up a Deus ex Machina that not only cures Eragon of a crippling injury but makes him stronger, faster, quicker, smarter, and prettier.

Eldest does not have a single redeeming quality. It is a blight on the face of the earth and one of the single worst books I have ever read.