What have I gotten myself into?

Time is not a concept. It is a word. And like any word, it can be manipulated according to one’s subjective state (page 15).

The dictionary defines ‘concept’ as a general notion or idea, which is pretty accurate. More importantly, you could argue that anything that we have a word to describe could be a concept. Like, you could describe gravity as a word, and then step off a skyscraper to demonstrate how you’re manipulating it according to your subjective state. Turns out to not work as well as most people think. In other words, this is meaningless, pretentious bullshit attempting to sound smarter than it actually is.

Eng rambles for a bit about quantum mechanics and relatively and perception creating reality:

I think what Eng is going for here is that if you change the human – well, I guess the dragon – mind enough to comprehend reality differently, to see the True Nature of what exists, then you have the ability to manipulate reality. It’s not inherently a bad plot device – it’s been done effectively before, such as with Neo understanding the Matrix

is not real, or Arthur Dent throwing himself at the ground and missing

– but if he wants to go for it, just fucking go for it. Spare me the wildly inaccurate ‘scientific’ technobabble.

We learn there’s a kingdom called Drakemight which is pretty awesome.

Architecture stretched to the skies in the forms of simple geometric shapes, complex and intelligently crafted, but untainted by the opposing thumbs of man (page 15).

…but presumably created by the opposing thumbs of dragons, since that really is the only way you’re going to be able to build things like skyscrapers, you know? Not to mention the image on the book cover clearly shows them having human hands with opposable thumbs which…never mind.

We meet a young dragon named Dennagon who is supposed to be on guard but is instead reading a science book. So. He’s not very responsible or good at his job. Got it.

“Interesting,” muttered Dennagon to himself, “The force of gravity is 9.8 meters per second squared on this planet, but not in space. I wonder if ‘space’ actually exists.” (page 16)

So, his book is able to tell him that gravity is different in space, and that makes him wonder if space actually exists. A perfectly natural intuitive leap.

Also, I’m reasonably certain this is wrong. I’m not a physics, science, or math major, although I have played all three on TV. But literally 10 seconds on Google tells us that 9.8/ms2 is the acceleration of gravity, not force. Force is mass x acceleration. So all this pretentious sciencebation isn’t just annoying, it’s also wildly accurate. [Note: I’m probably not going to spend much more time fact-checking Eng’s stupid science knowledge, so if I miss anything, feel free to point it out]

He keeps reading as a bunch of human (!) knights with their horses march up with a catapult. The “commanding paladin” marches up and orders Dennagon to “desist” or “be vanquished”. Yes, this is seriously how this book is written.

Dennagon asks if they can attack later because he’s reading his ‘tome’. The knights arm their lances and charge, rather than firing their catapult at him, which I feel makes a lot more sense.

Dennagon nonchalantly dropped down from his perched position to the ground. Without even taking his eyes off the book, he casually thrust his fist out, punching a hole straight through the head of one of his enemies as it charged. The decapitated body still hanging off his forearm, he merely shifted his fists to the side so that the others could run into it. Expectedly, they did so, blasting apart their own skulls against his scaly knuckles (page 17).

Okay. I’ll let you have the part where he punches his fist through a human skull. Dragon anatomy and all that. Human beings cannot run fast enough to blast apart their skulls when they encounter an immovable object. More to the point, that is not how humans behave. These are knights, they’re in the business of killing things with edged weapons. They’re not lemmings running off a cliff!

The remaining knights fire a bunch of arrows, so Dennagon pulls his sword and deflects the arrows and then a poorly choreographed fight scene ensues. Suddenly, the knights are a bit of a threat, even though a moment ago he was able to slaughter a number of them with a bare fist without even looking. They’re not much of a threat though. He carves them up. Blood sprays. Body parts go flying. They fire a catapult and he catches the boulder in midair and throws it back. Eventually one of them stabs his book and the bookmark falls out, which really pisses him off, so he breathes fire, incinerating a few of them, melting the armor of a few others, so they die in agony, and the rest run….

That leaves only the main knight who charges. Dennagon picks up his book and hits him hard enough that the body explodes, and heads back into the city.

Polyhedrons, all simple in shape, stretched up from the ground for several miles into the sky (page 19).

Polyhedrons by definition are not simple in shape.

Eng explains there something “oddly advanced” about it, something “strangely futuristic”, and then goes on to say it’s 10 times higher than most castles of that era. Most castles, at their highest, are about 130 feet. If these skyscrapers are two miles high, that’s 81 times higher than that. You fail at math, Eng.

Dennagon flies home to his apartment which is stuffed full of science books. We learn he’s full of angst and everyone looks alike and he hates all of them. Rebellious teenage hero! He pulls out a crystal ball and asks it what’s going down. The crystal ball explains that “data is receding” [?]. He then pulls out a black marble, sticks the marble into the crystal ball which analyzes the data.

“Your daily collection of data: 8 million liters of information.” (page 21)

He asks the crystal ball to read his messages as he opens up his icebox and drags out a lion carcass, which he begins casually munching on as he looks for something to read. The last message is from a breathy female who explains that it’s about the fate of mankind and existence itself will soon end and blah blah – then she mentions the Lexicon.

The words walloped Dennagon like a ton of maces (page 23).

The fuck does that even mean?

He tells the crystal ball to trace the message and it does, using mana – I swear I’m not making this shit up – eventually giving him a location 100 miles away. About the same time, there’s a call that orders him to report to his lord ASAP. Dennagon knows he can only do one or the other first, and that he’s not able to defy his lord. The obvious choice would be to see what’s going on with his lord and then make tracks for the location. Instead he decides to ignore his lord and make tracks.

We cut forward. Dennagon is flying through clouds and getting wet in the process.

He was a hundred miles from his homeland, and a thousand miles above the ground (page 25).

For comparison, the Space Shuttle orbits the earth about 200 miles up. 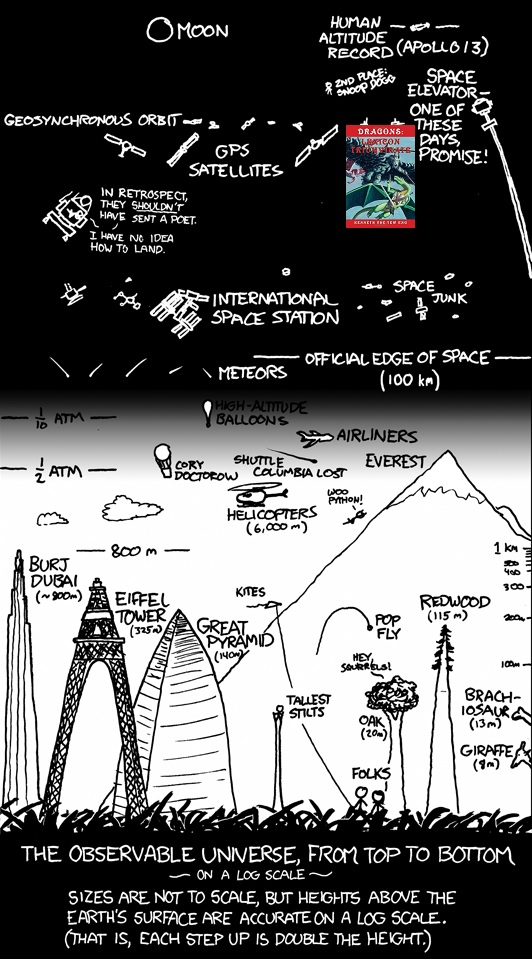 A winged creature wouldn’t be able to fly due to lack of atmosphere, and I’m reasonably certain there aren’t going to be damp fucking clouds up here, either. Also, if he had to travel 1,000 miles in 40 minutes, that means that Dennagon can fly at 1,500 MPH (2,414 KPH).

This man is more out of touch with reality than any writer I’ve ever encountered. This is making me long for the scientific accuracy of Maradonia.

A female drake appears from the vapor, standing on the cloud. She has no wings. Fuck it, maybe these dragons can teleport. Who knows? She introduces herself as Lyconel and they occasionally lapse into use words like ‘hath’ and ‘thy’ that aren’t used remotely consistently. Dennagon launches into some threats.

“You will tell me what your purpose is in speaking, lest I cast you forth into the gorges of doom whereupon my emerald fires shall rip past your scaly hide and smite you with great force against the desiccated dunes down under.” (page 27)

Lyconel says that they’re both seeking the Lexicon. Dennagon says it doesn’t exist, which he clearly believes since he just traveled 1,000 miles after hearing about it. Lyconel points out his obvious bullshit and asks why he still dreams about it every night. I’m getting some strong Matrix vibes from this. I wonder if Eng is a fan?

Lyconel says he can follow her if he wants and walks off. Suddenly Dennagon realizes who she is and draws his sword and attacks. Apparently she once tried to destroy – sorry, ‘decimate’ his city. They fight. Eventually he cuts her. Then she knocks him down. Then he knocks her down. Eventually Dennagon gets bored with this and bulls out a spellbook – [!!!] and reads one he’s bookmarked.

“All the universe’ hellish wonders,” he read with the ire of a draconic wizard, “give me the strength of mighty thunder!” (page 30)

It’s growing increasingly difficult to take this book seriously. And we’re only on chapter one.

He blasts her with a few more spells and finally he gets his sword to kill her, but she lets herself fall off the cloud. He monetarily considers chasing her, but decides against it, because she’s a lunatic. Then again, he does apparently believe she tried to destroy his home city, which is a pretty good incentive for chasing her down and finishing the job, but we’re already well aware he isn’t the most responsible of dragons.

Dennagon realizes it’s 18:29, and he’s late for his meeting with the Archive Lord.

5 Responses to “Fragment Two: The Ire of a Draconic Wizard”