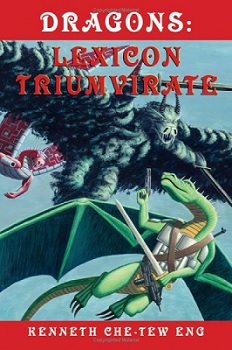 almost exactly three years ago – and since then it’s been sitting around in my “I should totally spork this” pile but for one reason or another I’ve never gotten around to it. My copy is autographed (unexpected) with the inscription “There is no rift between sorcery & technology” which does not make sense to me, but maybe it will make sense after I’ve read it?

It’s written by Kenneth Che-Tew Eng, a mentally unhinged racist who achieved some notoriety for his newspaper article “Why I Hate Blacks”, speaking out favorably about the Virginia Tech massacre, and finally being arrested and sentenced to a year of mental health treatment for threatening his neighbor in New York.

All of that makes him a pretty unlikeable guy but doesn’t really factor into my wanting to spork this book, because holy shit, have you seen the title? It’s called Dragons: Lexicon Triumvirate! Have you SEEN the cover? There’s a dragon with a flak jacket who is double-fisting a sword and a pistol while he fights a giant smoke monster!