Boots has a foal. It’s not really that interesting. Berdoll tries to work in a little character development with Darcy getting all bothered at the sight of Boots giving birth, probably because he now suddenly has made the Boots = Elizabeth connection. Or something. Maybe he’s suppose to realize how dangerous childbirth really is. Which doesn’t really make sense, because Boots delivers the foal relatively easily and there are no complications. Not to mention that Darcy already knows the dangers of childbirth, because Elizabeth miscarried once and it almost killed her. So I have no idea why this is bothering him, it doesn’t make any sense.

Chapter Forty-Nine – The Pleasure of His Company 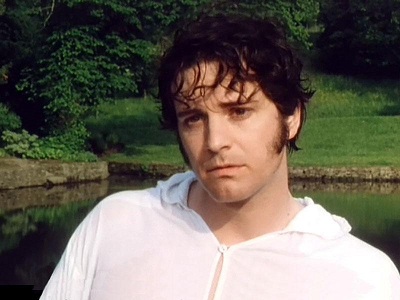 You are gazing into Linda Berdoll’s wet dream.

She spends awhile thinking about the tuft of chest hair that she’d glimpsed, and then moves on to Darcy’s boots. It’s pretty evident that Berdoll has an extreme boot fetish, and so, by extension, Elizabeth does as well. Elizabeth thinks back to the time when she asked Darcy to have sex with her wearing only his boots. Darcy was confused, but agreed anyway. And the sex was amazing. But the sex is always amazing for Elizabeth and Darcy.

Finally Darcy comes in and they leap into each others arms and start passionately making out. Darcy carries her over to the bed and rips her gown off, a move I never quite understood. It’s just as quick to take the thing off, and what if she really liked that gown? She might not complain now, but next morning she’s going to be pissed. Anyway, Darcy makes out with her breasts, and Elizabeth pulls his ‘virile member’ free from his breeches, and then Darcy starts to pull his boots off, but she stops him. So they have sex with his boots and breeches still on.

Not unexpectedly, he reached achievement far too quickly to satisfy her fully flowered cupidity (page 211).

He gets up and goes to close the window and then comes back….and they do it again.

Because Darcy is a wild honeymoon stallion.

Chapter Fifty – How Low Is Bottom?

Sally and company enter the workhouse.

Chapter Fifty-One – For the Love of London

Nothing happens. However, we have reached the halfway point of this book, and we still don’t have a plot!

Chapter Fifty-Two – The Spoils of War

Bingley’s finances aren’t doing that great. Darcy gives him some advice because he thinks that Bingley is making poor decisions, but Bingley ignores the advice.

The young Darcys have a cold so they pack to take off for Brighton.

Sally’s life in the poor house sucks. She gets a letter from John Christie and reads it, he chats about life with the Darcys. I have no idea how a poor seven-year-old girl who lives in the slums knows how to read and write. In fact, I’m going to call bullshit on that. Berdoll might have inserted an explanation somewhere that I’ve missed, but I’m still not buying it.

Anyway, she finds out that John has gone off to war as a grenadier and the grenadiers are usually the first to die, and so she makes a Vow:

Her brother deserved all that was good in the world. If he received otherwise, that offence fell at someone’s feet. She would travel to this place called Derbyshire and venture to this house of Pemberley. She would uncover what befell her brother that drove him to join a battle clear over the water. She would if it took all the rest of her days (page 227).

Hmm. Is this the another glimmer of a plot that I see? And we’re only past the halfway mark in the book? This would be exciting, except that this isn’t a remotely interesting plot, and I highly doubt that much will come of it.

Sally’s little sister croaks, and they bury her, and the next day she sneaks out and takes off.

Georgiana and Fitzwilliam meet Elizabeth and Darcy at Brighton. Elizabeth and Darcy are slightly confused, because while Georgiana is clearly pregnant, she’s also clearly only about six months pregnant, and it’s been nine months since they were married, and Georgiana was about six weeks or so pregnant at the time. Darcy wonders if she miscarried and then got knocked up again, which is probably the best lie they could tell. Propriety demands that they can’t ask right out, but Elizabeth brings up the subject when she’s alone with Georgiana in a roundabout way. Georgiana pointedly says that she hasn’t miscarried, and that initially she was mistaken, and doesn’t bother to try and be even remotely convincing. Elizabeth realizes that Georgiana actually made the entire thing up. And then tells Darcy. Neither of them are that amused that she lied to them and tricked her husband into marrying her, but in less space than it takes me to type this (literally) they decide to just drop the entire affair.

Well, that was convenient. No lingering effects from this sordid affair. Nice.

The Darcys enjoy Brighton with the Gardiners, who have left Lydia to her own devices for a much-needed vacation. They have lots of fun walking around. It doesn’t sound interesting. But then Lady Catherine de Bourgh shows up. Astonishingly, she’s delighted to see them. She simpers and smiles and makes love to them all, compliments the children, and is incredibly friendly. She introduces them to her new son-in-law, Lord Beecher, who is now married to her daughter Lady Anne.

Lady Anne also happens to be pregnant. Elizabeth wonders how they missed hearing about the wedding, does some math, and realizes that Lady Anne was knocked up when she was married. Hilarious!

Finally Lady Catherine leaves. Honestly, knowing her as I do, this entire affair would make me immediately suspicious and wonder just what she is up to, but this doesn’t occur to any of them.

Which is an awkward chapter title, as this is, I believe, the first time the narrator has ever directly addressed the reader.

Lydia subjects the Gardiner’s servants to all sorts of ridiculous abuse. I would think that the Gardiners are smart enough to leave explicit instructions to prevent this sort of thing, but apparently not. Anyway, she fires a few people and finds herself needing a new servant – and who should turn up on her doorstep a page and a half later but Sally herself. That’s awfully convenient. A kid who just might be a bastard child of Wickham or Darcy, currently on her way to Pemberley to avenge her death brother, and she just so happens to start working for Lydia. I would say the odds of this are slightly less than one in a million.

Anyway, Sally proves competent at changing nappys and so Lydia hires her on the spot.

They do random things in Brighton. None of it is very interesting. Eventually news arrives about Lydia’s current behavior so the Gardiners take off to deal with it. Elizabeth decides that she needs to get Lydia settled into her own house to take the strain off the Gardiners. And then one day, she’s walking out of a shop and she happens to see Wickham poncing down the street.

Wickham spends some time coming up with a suitable plan to explain his disappearance and sudden reappearance. Eventually hitting on one, he sails back to England. While en route, he practices his story on the passengers of the ship, honing his lies and tweaking bits here and there until it’s well-polished. He’s putting on a slight limp, and his story involves describing a horrific battle wound which led to a lengthy stay in hospital. The story isn’t half bad, and it rather makes me like Wickham as a character, because he’s the only person in this entire book who is actually shown thinking about and then overcoming his problems.

He also has Cesarine’s child with him, and his explanation is that he found a dead soldier holding a child and he rescued the kid. This wins him all sort of sympathy points. Finally, he lands in Brighton, hires a nursemaid to look after the child, and they all take off for London.