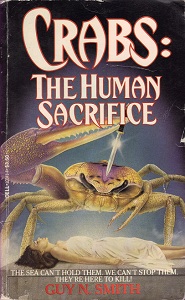 Words cannot do the cover of this book justice. However, I will do my best. It displays an enormous crab holding a knife in its claw, about to stab a beautiful and probably virginal young woman to death…instead of using its enormous claws.

This particular book is the sixth in a series of books about horrifying murderous crabs. I haven’t read any of the previous books and I have no intention of doing so, but I doubt it will effect this particular sporking. I’m not sure what Smith was going for with this novel, but it probably doesn’t require a minute knowledge of the previous five crustacean-themed books. At any rate, this entry is about crabs and kinky sex. Lots of it. Who knew that crabs and sex went hand in hand?

Final note: this book was given to me by one of my friends who knows I spork poorly written books and thought I should take a stab at this one. A gentle hint to anyone who has suggestions for me…

7 Responses to “Crabs: The Human Sacrifice”