There’s a picture, and it’s not great. It’s not terrible, but’s not particularly good, either.

We move into the mind of Eos the Dreamer who reminisces about their first childhood. There’s references to a platinum blonde mother named Veronica, a caramel-colored-hair father, Renton, and to Mississippi. Wait…Mississippi? So what, this is actually taking place in our world, as well?

Apparently this individual is gifted supernaturally to influence people’s minds and their dreams to make them feel good and safe, which comes in handy when the townspeople torch the farm and burn her family to death. And then Media brings her to Xanthippe where she’s an Angel.

Okay. Hopefully this will become relevant sometime, because as it is, it’s pretty fucking boring. Infodumps are never interesting, especially when they involve new characters we have no reason to care about. If Eos is important, then introduce her to the story when she is actually doing something, or impacting the plot in some way. You can fold in any relevant backstory as we learn more about the character.

Back to Harlow and a half-page description of her wedding dress. And she’s getting married. Interestingly, there’s absolutely no sense of where this is taking place, which is kind of a common theme running through this book so far. Either the location is described with intense, over-the-top detail or it isn’t mentioned at all. Here, Breeanna mentions that Harlow is brought to “the edge of the stairs” but we don’t know from where or where she’s going. Personally, I’m not a fan of description, and I think that less is more, but there should always be some, enough that the reader can easily picture the scene in their head. “The ladies-in-waiting led me from my dressing room down a richly decorated staircase leading to the ballroom.” 19 words and you’re avoided this problem entirely.

King Abaddon walks her down the aisle to Jafar. The High Judge states the vows and they both say I do.

Poisoning her fiancé doesn’t give her a qualm, but she feels guilt over lying about her forced marriage vows? Is it just me or does Harlow have a pretty fucked up moral compass?

And they’re married. Harlow changes for the reception, and during it, she slips a steak knife into her clothes. Later that night, she waits for her moment and slits Jafar’s throat – no, wait, that would make too much sense, instead she pulls it out and points it at him. We get some dialogue that doesn’t sound like anything anyone in the real world would ever say in their life:

“I am a well-trained noble-blooded prince. You couldn’t lay a single, delicate finger on me.”

“That’s where you’re wrong, Jafar. You may have been trained by some overpaid defense teacher but I grew up in the real world.” My voice cracked and he chuckled. “You ranivorous slime!”

Yes. He actually calls out that her fingers are delicate, and she uses the word ranivorous.

Our badass, real-world-living heroine lunges at the evil prince and manages, somehow, to stab him in the chest. He screams and she runs and breaks the window, climbs out into a large maple tree and scales down into the garden [!]. She then runs to the stables, somehow knowing where they are, mounts a large black horse because there are no grooms or anyone around and I suspect she must be an expert rider, and takes off.

Even the blistering rays of the setting sun could not restrain a chill from seeping into my bones as I sped through the city and out the gates, consumed by the deep wilderness. A fleet of horses charged at my heels (loc. 569)

No, Breeanna. You don’t get to just say “She shot the President and then she ran away.” That’s not how real life works. Even in the incredibly unlikely event that Harlow is actually able to stab him then climb through a window of broken glass and shimmy down a convenient tree that happens to be growing there and escape the city…you’ve got to give us details! How the fuck is she supposed to be pulling this shit off?

The section ends with her angsting about never seeing her one true love, Darian, again, which is kinda rude, considering she just married someone else.

Over to Darian, who thinks about when he and Harlow met. The tenses keep switching between the flashback and the present which is annoying. He was seven, she was four, and he knew that he would always love her.

I knew she not only saw my body but the mortality of my very soul (loc. 582)

Darian jumps off a branch, because he was on a branch for reasons that are not explained. He mounts his black horse, Poncho, and rides off to the next town, where he stops at a tavern. Some ladies are gossiping about conveniently topical information – namely, the stabbing of Jafar. The bartender reveals that every bounty hunter around is hunting for Harlow because of the price on her head. Even the legendary bounty hunter Cane.

“I tell you he eats children for breakfast and their pets for dinner.”

“So what does he eat for lunch?” I snapped back with a show of my serious sarcasm problem (loc. 625).

Darian declares for the entire bar to hear that he’s going to go try and rescue Harlow, which is a really smart thing you want to tell to a bunch of drunk idiots, and heads out the door. There are children playing with his horse’s tail. He yells at them and most of them run away, except for one girl:

Her eyes locked with mine. Deep brown, the eyes cried to me silently. Cried for someone to love her. Her matted bronze hair whipped around in the wind like angry snakes thirsting for blood (loc. 541).

And that’s that. She was just some random stranger we’ll never see again.

Over to Beau the jester, except it’s misspelled as Bearu. In the chapter header. Where you’d think it’d be hard to miss. He’s just pleased as punch about the stabbing, so he decides to finish the job. He fetches the poison from where Harlow hid it, dumps it in some wine, and takes it in to Jafar.

Yep, this ingenious plan would have worked perfectly except for one of the guys responsible for bringing Jafar food every single fucking day for the past twenty years just happened to forget that he hates red wine. Totally understandable mistake, really.

Anyway, the poison seeps into the cuts on his face and starts sizzling and Beau collapses to the floor and dies a dramatic death, thinking about how it’s punishment for everything he’s done to spite Jafar.

Back to Harlow. She wakes up, feeling like death. Her horse is gone and her shoulder hurts and she thinks she broke her collar bone because these people know about collar bones. She wanders around for a bit until she finds a water hole and chugs some water. And chills out for a bit until suddenly some arms grab her. She sees a horrible werewolf beast and hears voices arguing over whether to help her. Then she gets put on the ground and we get about a page of random emotions and shit touching her. For some reason it seems like Harlow has lost the ability to see. Or at least Breeanna has stopped describing anything Harlow could see. It seems rather odd to describe the werewolf that she is seeing and then abruptly stop describing what she can see but not actually tell us. Is the world blurry or swimming? Is something covering her eyes? Has everything gone black? Any writer with an ounce of competence would just say why she can’t see…but this is Breeanna Mae Alessandra, who should take writing tips from Gloria Tesch. And how frightening is that?

Later, Harlow wakes up and is in a mostly empty room with walls made of animal hide. She leaves the hut and sees a fire burning. She sneaks over for a better look and sees a group of young, muscular, shirtless men with black hair. So…basically the werewolf pack from Twilight 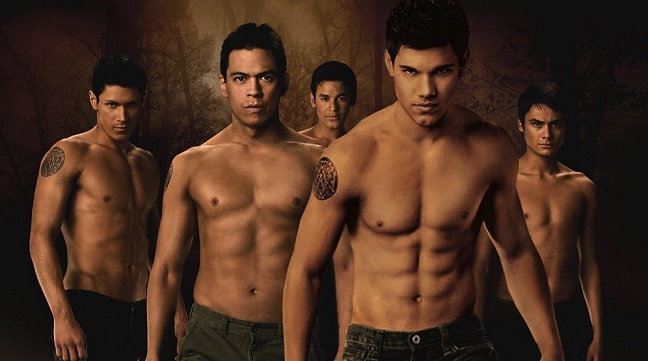 The pack glares at her, but something steps between Harlow and the rest of the group. The pack is pissed because he brought an outsider in, but the guy explains that The Great Lake is their responsibility and since Harlow drank from it, she is now their responsibility as well, at least until morning. I guess that makes sense. So if a bird flies down and takes a drink from the lake, then flies away, now the werewolf pack is responsible for its well-being?

Then again, maybe he’s just making shit up because he has the hots for Harlow.

The guy says she’ll be gone the next morning and drags Harlow back into the hut, tying the door shut behind him. He has budging muscles, which I think mean bulging, and golden eyes. Harlow is terrified. He says that he won’t harm her, and strokes her cheek.

“A what?” he cut me off, bitterness enveloping his once somewhat tender voice. “A monster?” (loc. 746)

Actually, you’re putting words in her mouth there. He huffs about it for a moment, then points out that he saved her life. Um…from what? Last I saw Harlow was getting a drink and then you grabbed her. Or were we supposed to think that someone else grabbed her and then the terrible werewolf rescued her from that someone? That could have been helped by the previous scene being written in such a way that someone who read it would know what was happening, which admittedly is a lot to ask.

Harlow agrees that he saved her life and he points out that she’s ungrateful, so she thanks him. I’m getting the vibe that our werewolf friend is a bit of a drama queen. Harlow probably agrees, because she says she needs to leave.

I stepped to the door where he had knotted the strings together, only to be blocked by the boy’s massive body. I took a moment to marvel at his sheer masculinity and fine-toned tan (page 759).

He explains that it’s not safe to travel through the woods at night. Harlow thinks about Darian and decides to take her chances. So she grabs a pouch from the ceiling, pulls out a knife that she happened to see earlier, and slashes at him, cutting his arm, which gives her the time she needs to tear through the leathery [!] cloth walls of the tent and take off. She sees some lights that look like fireflies and runs towards them, but instead, it turns out to be the severed head of a vampire with dangling glowing intestines and fresh blood dripping down her lips. Holy shit!

To be fair, Breeanna hasn’t used the word vampire yet. But it’s a humanoid with fangs, so yeah.

The humanoid with fangs calls Harlow dessert, but then the hot werewolf leaps between them.

His name has never been mentioned, or even hinted at, before in this book. That’s a double shot of straight vodka. Choose something decent. Ketel One or Grey Goose.

Also. Roswell. Roswell? Are you fucking kidding me?

Harlow watches as fur covers Roswell and he grows a snout. Then he takes a forty-foot leap to where the head is hovering and snaps and fluid splatters across Harlow’s face.

I wondered if it had begun to rain. Incoherently I realized what I had felt was not precipitation from the heavens, but the blood of a creature born in hell (loc. 780).

She has remarkably perceptive skin.