At First Glance » Part 10: An Astronomically Perilous Volume of Horrors

We get a picture. 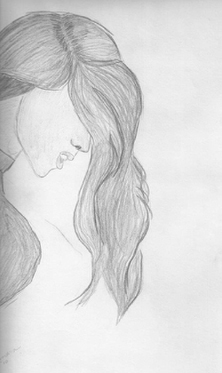 He has everyone shake hands which is very polite and then turns to Harlow – wait, Harlow? Just last chapter the strangers were talking about a far-off stranger, who I assumed was Xanthippe, and now, suddenly, abruptly, without any transition, or even a throwaway line like “It had taken a month for them to find Xanthippe” or “The next morning Xanthippe had arrived at the camp” or, fuck it, “Xanthippe glanced over at the girl he had just met, named Harlow.”

Breeanna, there’s this thing in films and TV that you’ve seen a lot, and it’s called an establishing shot. Like, you see the outside of the White House in a big beautiful shot and then a moment later when you cut to two guys in suits walking down a corridor, the audience knows, okay, they must be inside the White House. You need roughly the equivalent when you’re writing a book. When you switch to a new scene, especially when it represents a change from the past, you need to give the audience information. Ideally, as they read a scene, they should be able to visualize it in their mind’s eye. This doesn’t take an infodump or a paragraph of description and you don’t need to describe it in a huge amount of detail, but for God’s sakes, give us SOMETHING. All me to give you an example from a book you may have read, and if you haven’t, you should: The Princess Bride

The Great Square of Florin City was filled as never before (page 87).

11 words. We know precisely where we are, we know the place is packed with people, and we know something special or exciting must be going on. Very simple, not a lot of fluff. But if you omit it, people don’t know what the fuck is going on in your story.

Or, take an example from the start of Chapter Three:

Four of them met in the great council room of the castle. Prince Humperdinck, his confidant, Count Rugen, his father, aging King Lotharon, and Queen Bella, his evil stepmother (page 71).

This takes almost no time at all in the book, but it perfectly sets the scene. First, we know where we are, and we have an inkling of what is going on (since they’re meeting in the council room). Second, we establish the relationship between the characters: we know Humperdinck trusts Rugen, we know his father is getting old, and we have an idea of how these characters relate to each other which is very important information for the scene.

I could go on talking about what an amazing writer William Goldman is but I think you get the point: virtually all good books have these things. Books, generally speaking, are meant to be understood. Unless you’re trying to be deliberately obtuse, in which case you’re a terrible writer and communicator and possibly not a very nice person, you should be writing with a simple, straightforward style and the exact goal that your readers CAN UNDERSTAND WHAT IS GOING ON.

And if you don’t know how to do this, you should read more, and you should pay attention to how good writers accomplish these sorts of things.

Xanthippe walks Harlow through the summoning of the Great Gift Guru – which is a stupid name – and they teleport or something to the center of the earth.

The heat was almost unbearable and simultaneously not (loc. 3238).

A voice asks whether Harlow is worthy. Harlow explains that she isn’t worthy, and isn’t a perfect good-doer, and has no importance, which is relishing, although Harlow really hasn’t struggled with ego problems through this book. Anyway, the voice is pleased with this response and says that by accepting her unworthiness she has displayed her humble nature and may take her wish.

Roswell thinks he’s close to the end but it turns out he’s not.

She hears voices asking her what she desires and says that she cannot lie to them, since they already know her heart’s desire. Harlow thinks about wishing the book out of existence, her heart races, and she wishes aloud that Roswell was alive and here with her again. The voices say they know. And Roswell materializes.

I was hugging him as I took his face in my hands and he stroked my own. I wanted so to kiss him, knowing how inappropriate that would be. Then before I knew what was occurring, he pulled my face to his. Our lips met with an electric shock of passion. Such desire felt nearly sinful. He drew away to cast me a look of sheer obsession (loc. 3289).

Zosime is not particularly pleased, because, well:

“Harlow’s wish was supposed to be to rid the world of an astronomically perilous volume of horrors, however instead, her wish was you.” (loc. 3299)

Trust Harlow to fuck things up.

Roswell is furious and asks her why she couldn’t have waited five more “minuets” which I think is supposed to read minutes, since, after all, he was about to get back. And he even sent her a message! Although to be fair, instead of saying “I will return” he could have said “Will Return – Roswell” which would have been a bit easier to interpret.

Things continue to happen without rhyme or reason:

“Be easy Zosie,” Master Smith advised. “Even if she had wished for Fel Nerr Zu San Vech to no longer exist, it wouldn’t have been granted. It would have happened all the same.”

“Actually,” I interjected, “if I had lied, no wish would have been granted.”

“Well, I hope you’re happy you moron! Now, the entire world is going to come crashing inward because you couldn’t live without your precious boy toy!”

First, if they knew the wish wouldn’t be granted, why did they try to accomplish it? Either you know it will work, you know it won’t work, or you’re not certain, and why wouldn’t you fucking coach Harlow towards how to handle it?

Second, as Harlow points out if she had lied the wish wouldn’t have been granted, so why does she start crying randomly? Unless she’s an emotional basket case due to having a bun in the oven in which case okay.

Third, considering Smith pointed out the plan was fucked from the start and Harlow has just confirmed it, why is the unnamed third party blowing up at Harlow when we have JUST FUCKING ESTABLISHED THAT IT WAS ALL FOR NAUGHT?

Are these characters even in the same room? Are they listening to each other? They are aware that conversation has an order, that statements people make are generally influenced by the new information that was just presented?

Anyway, they all get thrown back to the surface.

The prince isn’t particularly pleased to see Roswell holding an unconscious Harlow. He thinks that Roswell has a terrible voice and smells bad. He doesn’t wonder where Roswell came from, which brings up another problem within this novel. When each little POV section isn’t completely ignoring relevant information, it’s not structuring the sections to match the information that characters are aware of. For example, in this section you’d expect Jafar to be relieved that they have returned, to wonder what happened while they were gone, to wonder who this Roswell chap is and where he came from, but none of those things happen.

Roswell and Jafar argue. Thea asks them both to just get along.

First, I love the nickname of Goldilocks. It’s anachronistic but I don’t even remotely care. But more importantly, why is Jafar referring to Roswell as an animal? Breeanna doesn’t actually tell us what form Roswell has assumed, but considering Harlow and Roswell just shared a passionate kiss I would imagine he’s in his human form. If not, that conjures up some rather interesting images of girl-on-wolf action, and I’ve already had to think about frog sex.

Harlow wakes up. Xanthippe asks her who the father is. Jafar announces that it’s him, which makes Roswell tense up a bit.

Xanthippe asks her some questions and determines that Harlow’s mom was an Elf but her father was not, which makes Harlow half Elf, which means…

“Not many Elves were keen on marrying out of their race. But if a female did so with a human and had a daughter who bore the children of a human, the children would be all powerful!” (loc. 3361)

The only thing worse that prophecies are all-powerful children. Yes. Children, not child. Turns out Harlow is about to pop out twins. Literally.

Good thing she now has two men around to look after her. Have I ever mentioned how much I enjoy love triangles between a half-elf heroine, her rugged werewolf lover, and her rapist prince?

8 Responses to “Part 10: An Astronomically Perilous Volume of Horrors”