So yeah. About that cover. Courtesy of brilliant reader “Guest” there’s some evidence that the cover image for this book…bears an awfully strong resemblance to a drawing of Poison Ivy by John Tyler Christopher. Take a look: 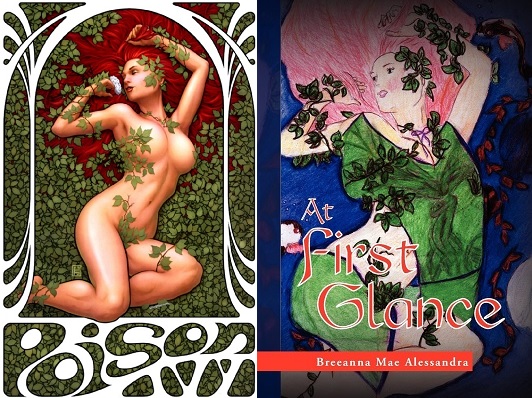 It’s kind’ve a sketchy area, legally speaking, but I wouldn’t feel comfortable selling a book that had an image that was THAT close to someone else’s copyrighted work.

We get started with her explaining that she uses different time units than we do. An Epoch is a day, and 9 Epochs make a Cycle, and 4 Cycles make an Apogee, and 15 Apogees make a Zapato, which is kinda like a year, which makes people a bit older than they actually are in the book. She explains that you can calculate it by multiplying ages by 1.4. Technically, it’s more like 1.48. So if the book tells us about a 13-year-old having sex, it’s not weird because actually they’re over 18 in Earth years.

Here’s a tip, Breeanna: there is really no reason why you need to invent a new calendar for your fantasy world. I understand the urge, you’re trying to create a new culture, and give your world depth, and those are commendable, but unless there is a specific plot reason, there is no reason to even mention how your characters measure time. If it makes you feel any better, remember that your story is (probably) being told in English and has therefore been translated into English. Otherwise, you’re just making the story more difficult to understand.

She explains that there are three moons in the sky, which should be brought up in-story rather than in the author’s note, and then she names all 15 months, which have names like Xanthippe, and Hippolyte, and Media, and Sapphira. I can tell I’m really going to enjoy this book.

Next, we get a prologue that doesn’t make any sense, and includes a few gems:

A prophecy, yet to be fulfilled by the lost innocence of a soul untamed, unknown, and underestimated by vulnerability (loc. 68)

In this story you will see that making judgments and rash decisions will lead you to sure demise (loc. 70)

(Incidentally, through this book she’ll be following George R.R. Martin-style

of having each chapter titled with the character’s name and be from their point of view. Except it’s not a chapter at a time, it’s more like a page and a half. Let’s see if her writing is as good as Martin’s!)

We open with a chap named Jafar. Not making this up. Let me repeat that – Jafar 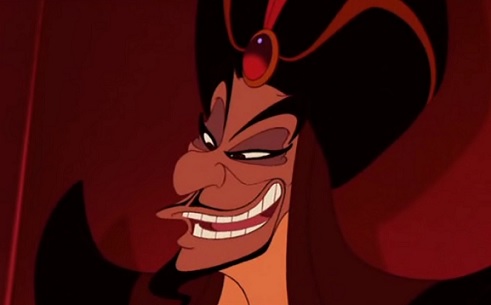 He’s riding through a city that disgusts him.

People lay on the sides of the streets like it was a marvelous inn in a fantastic city (loc. 74).

That doesn’t make any sense.

The horses need to be watered so he gets out of the carriage because this means that he has to walk the rest of the way, which also doesn’t make sense. But it’s so he can run into a beautiful fifteen year old girl which actually isn’t sketchy because in earth years she’s twenty-one.

A basket filled with gruesome half rotten fruits clutched in her arms. She wore a brown dress, long with a green trim obviously made by her own delicate, ladylike hands. She paused to curtsy, spilling the produce across the ground. I bent and picked up a single luscious green apple (loc. 80-82)

Okay. First of all, how do you know that she obviously made the dress herself? More importantly, you just got through telling us the basket is full of half-rotten fruits…and now suddenly there’s a luscious green apple in the bunch? That is in the same fucking paragraph!

Jafar lusts after her as he walks across the city, eventually arriving at his destination, where he pounds on the door “with malice” because he’s Evil or because he has the mental capacity to self-narrate how he pounds on doors. This is written in the first person, after all.

The doorman introduces him to the council as Prince Jafar, the Duke of the city, which is a little confusing. Jafar rolls into the room, which is undecorated except for paintings that tell the story of a warrior and a maiden. Jafar immediately pauses to spend an entire page narrating the story, because what any story needs in the first subchapter is to get pages of irrelevant history dumps in the middle of scenes.

Anyway. This story. The maiden Vandaline was stolen to the underworld by the god Hades. So the warrior Zefenous decided to go rescue her, and spent a year – sorry, “all the Apogees of an entire Zapato” – until he found the gate and killed the three-headed canine, and found where she was held captive, rocking an elegant black trimmed burgundy and fuchsia gown. I’m dead serious. We are in this douchey prince’s first person point of view, and when he thinks about the story of the warrior Zefenous and the maiden Vandaline, he remembers that she’s wearing a black trimmed burgundy and fuchsia gown.

…be right back, I need to refill my glass.

Okay. I’m back. Suffice to say, Martin this isn’t.

Anyway, Vandaline doesn’t want to go with him, because on the journey he’s lost himself and now he’s nothing but the Great God of Wine. Huh. Okay. That’s a rather odd twist ending. You’d think that they would have hinted about him having a drinking problem previously in the story, maybe started by being exposed to too much terrible literature, and that would sort’ve give the story some kind of Point to it.

Jafar gets up and explains to the city council that in exactly three Cycles the town is going to be demolished to make way for a military trading station, which, economically speaking doesn’t make sense. I guess it makes sense to take over the city and use it for a trading station, since then you have all the existing buildings and infrastructure along with the people to work in whatever capacity you like, whether it’s slave labor or support services. Jafar concludes that the council should not tell the townspeople, because everyone is going to die there. Then he leaves.

So, he’s evil. And also stupid. Why the fuck would you tell them that you’re going to kill them before you kill them and give them a chance to escape or mount a defense?

Our next chapter heading is The All Knowing. Maybe this is our narrator?

Harlow gets back home. She’s apparently our Heroine, and her name – Harlow Grimm – is one of them main reasons I decided to spork this. Names like that don’t grow on trees.

She is back from shopping, so ostensibly this is the fifteen year old beauty Jafar was just lusting over. There’s some nonsensical conversation with her mother and father, who ask if her fiancé, Darian Archer (yes) is coming over.

“When are you two going to marry, huh? I can’t be feeding you for the rest of your life,” Victor said crudely (loc. 140)

If Breeanna thinks this is what crudeness is she’s led a remarkably sheltered life.

Her mother shoos them out of the kitchen and they run out into the market square and play like children. Okay. Harlow is supposedly 20 at this point. She really should be married with a couple kids, and if this is the faux-medieval village I’m guessing it is, shouldn’t she be working to help support her family?

Back to Jafar, who is wandering around town searching for the girl. Eventually he hears singing from a tavern and sure enough, it’s her, singing like an angel. Afterwards, he heads backstage to see her and bumps into her father. Jafar cleverly (not my words) explains that he wants the girl’s hand in marriage. Her mother protests that Harlow is promised to another. Her father protests that she’s just 14 (20 and change). Jafar offers them 10,000 “Zarll” which seals the deal, after some “augered” which I think is a typo for argued? Proofreading, what is that?

Jafar explains that they’ll never see their daughter again and drags Harlow outside and throws her into the carriage and she screams for Darian to save her.

I was grabbed by the arm and spun around, readily feeling a firm punch in the face (loc. 191).

How do you readily feel a firm punch to the face?

This is not uncommon, incidentally.  We’re only a few pages in and already there have been several dozen completely incorrect or missing words, along with numerous typos and grammatical errors. I find myself wishing for the technical competence and Oscar Wilde-like

wordplay of Maradonia and the Seven Bridges.

There are far too many of these for me to point out each one, and to make it into a drinking game will only bring on alcohol poisoning.

Harlow punches him to the floor and then jumps on top of him and pins him, then smashes his head against the floor. Jafar explains that he saved her from the city’s demolishment because she is so beautiful and that he’s going to make her a queen.

“I don’t want to be a queen.” Blood pooled under my face.

You don’t need to tell us about both the blood pooling and the shock bubbling in consecutive sentences, Breeanna. We get it. He’s shocked.

All she wants is Darian. She tells Jafar that he’s half the man Darian is, so Jafar slaps her across the face, and they don’t say anything for the rest of the two-day trip to his castle. Things haven’t improved so he has his butler, Jenkins, escort Harlow to his chambers. Yeah, Jenkins. Take a drink.

I think if you are trying to make a statement about the female gender as a whole it’s supposed to be “women”.

Jafar visits his father, who is reading a book, and greets him by shouting “Old man!” I am getting the vibe that Jafar doesn’t think much of his father. Jafar explains the situation and his father suggests letting someone a little wiser speak to Harlow, as she is probably scared and confused right now. Jafar agrees, and we learn that he has a bit of a drinking problem. Probably from being in this book.

10 Responses to “Part 1: Underestimated By Vulnerability”