Over the past eight months I’ve received a steadily increasing number of emails, comments, and PMs about several websites discussing online author shenanigans. These websites claim a number of reasonably popular authors are purchasing reviews, making up fake awards, and engaging in sockpuppetry.

I’ve resisted writing about this for some time because I have very little interest in policing the online shenanigans of authors (Stanek being the exception), and I don’t have any direct evidence linking Stanek to these sites. However, unlike whoever is behind these websites, I try not to make claims unless I have, you know, actual evidence backing me up that I’m willing to show.

The brave freedom fighters behind these website have no such scruples, even though one of them is supposedly a former newspaper editor:

I will (briefly) be discussing some things that appear on the following websites:

Yes, I am linking directly to them. No, I don’t care that I am giving them traffic. Bad ideas do not survive when they are exposed to light.

Right, so the person who started this website is also the author of The Fiverr Report. And where is his content being published?

Gotcha. So really, this website is just an empty shell devoid of content, almost as if it was only created to attempt to lend an extra layer of authenticity to two other websites.

This website has an article on fake writing awards with a list of supposedly fake awards which is identical to another, slightly rearranged list of awards on Zon Alert. This article links to Shame on You which states Melissa Foster was outed for her fakery at Zon Alert.   So, again, another website with no original content.

So, multiple websites that all link to each other to add a thin layer of authenticity and increase SEO. Subtle.

The first article on this site states:

Yes. Yet ANOTHER fucking website created to link to Zon Alert. 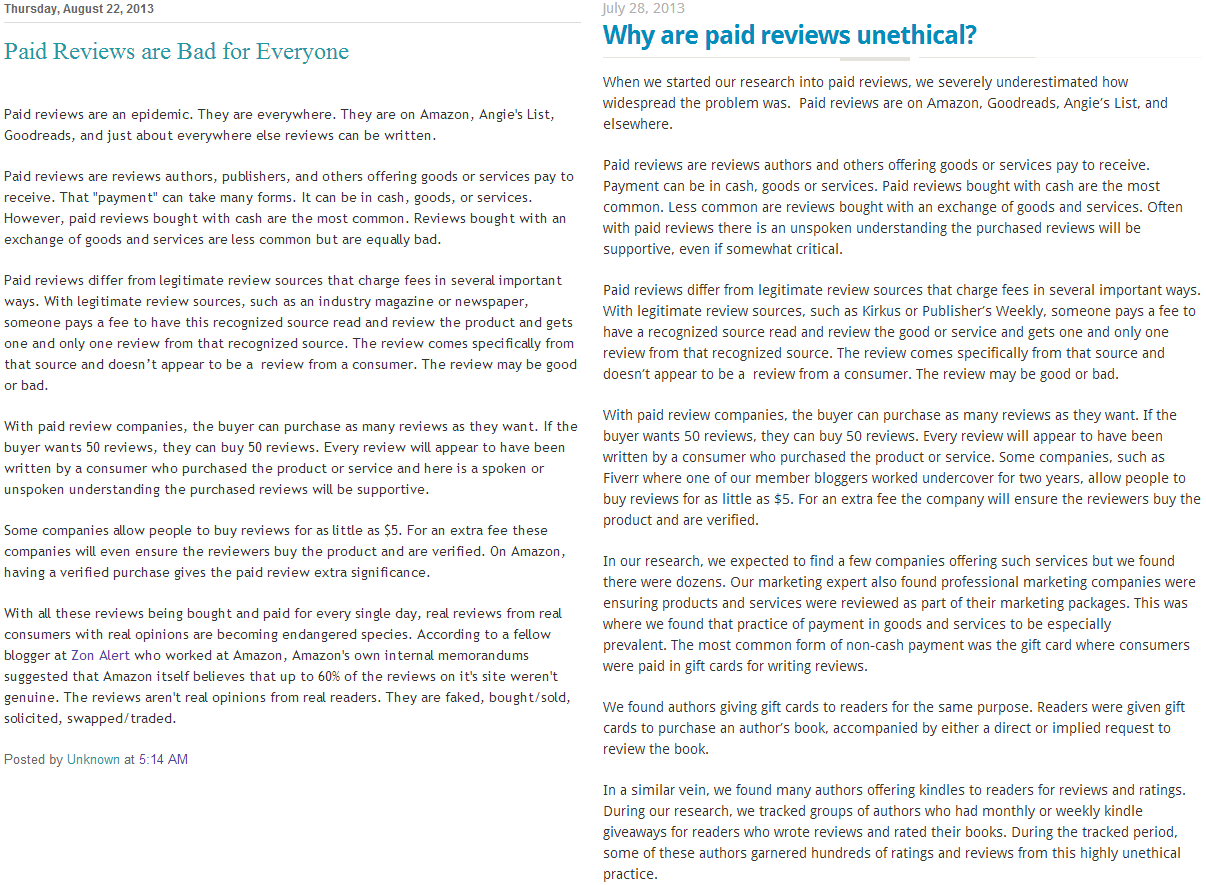 Whoever the so-called “authors” of these websites are, they make no bones about the fact that they’re responsible for and own these websites. Why, then, are they taking their own content, giving it the most cursory of rewrites, and re-publishing it on different websites? Seriously, if these are a group of people dedicated to peeling back the curtain and exposing the dirty secrets of online publishing and author shenanigans, why are they taking such a fucking stupid route of doing it?

I could go on about this, at length, but let’s just get to the point:

…Okay, fair enough. Do you have a link? Maybe some analysis? A screenshot? If she was openly discussing this shit on social media wouldn’t you have some documentation to SHOW what she was doing? Wouldn’t that be a lot more convincing then you just telling us she did things?

To be clear: this author is claiming to have a smoking gun. THEY HAVE SEEN THE EVIDENCE OF AUTHORS SWAPPING PLANS TO WRITE REVIEWS OF EACH OTHERS’ BOOKS AND UPVOTE EACH OTHER. Do they have any evidence of this? …nope. Screenshots? Nope.

Now, I know nothing about Carolyn Arnold. Maybe she’s actually done all of these awful things, but I’m not going to take the word of some random anonymous blogger just because they claim to be telling the truth.

Here’s a tip, if these authors are even remotely interested in being credible. When I argued, on my website, that Robert Stanek was misrepresenting and lying about the professional reviews his books had received, I went to the library, looked up the newspaper article on microfiche, and posted a copy of it onto my website so anyone, with a single click, could see precisely what I was arguing. If you want to hide behind a veil of anonymity you must be prepared to back up and source every single thing you’re saying, otherwise there’s no reason for anyone to pay any attention. And that really is my problem with these websites. There isn’t any evidence.

Here’s a list of authors supposedly pulling shenanigans that doesn’t have any evidence backing it up.

Or this one, about Hugh Howey and Melissa Foster supposedly buying their way onto Amazon’s bestseller lists…also, without any evidence.

Or maybe this one, about Hugh Howey buying reviews and pulling other shenanigans:

Do you have any proof of this?

No. It hasn’t. I spent some time on Google and the only references to his fake reviews is from your shitty website where you refuse to provide a shred of analysis or any proof to substantiate your claims.

That NY Times article doesn’t mention Hugh Howey, though. Do you have any evidence that Hugh Howey has bought a single fake review from that website? No? Okay then.

Here’s the thing. I hate fake reviews, I hate online author shenanigans and I hate anything that makes it more difficult for readers to find good, well-written books that they enjoy. If the authors listed on these websites are actually guilty of half the things these sites claim they are, I would like nothing better than to see them publicly outed for who they really are.

So, to the author[s] of these websites: put your money where your mouth is. If you actually have the smoking gun, let’s see it. I’ll be the first to share your damning, hard-hitting evidence of author shenanigans. If you don’t have it, or aren’t willing to share it, then do all of us a favor and shut the fuck up.

28 Responses to “All This ZonAlert & Fiverr Report Nonsense…”